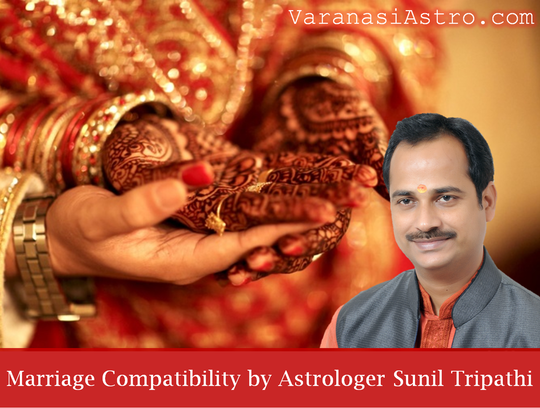 According to ancient Hindu Scriptures, every married woman is bound to put her husband at the place of her God. The bond created between a husband and a wife through marriage is everlasting as per these scriptures. The family – in simplest terms – is a sacred institution.
As per the Hindu beliefs, there are four desirable objects in life, that are collectively known as Purshartha;
Apart from being a significant aspect of Vedanta, these Purusharthas are considered to be vital elements in astrology as well. When it comes to Indian Astrology, there are 12 parts in Zodiac. Each part is considered to be a ‘house’. Each of these houses represent an important aspect of a person’s life from birth to death. These houses are connected to each other, and the way they interact with each other determines the life of the respective person.

The Houses and horoscope compatibility

The composition of the Seventh House defines all the matters related to marriage, love affairs, partners and relationships of a person’s life. As you already know, finding the most suitable partner is the key to a successful, happy marriage. This is when match making in astrology comes to play. In fact, astrology can help an individual to find his or her perfect match after doing in-depth analysis based on their characters depicted through horoscopes. Also, there are astrological remedies to overcome the potential evil effects caused by planets. Well, experienced and vastly knowledgeable astrologers like Dr. Sunil Tripathi follow various procedures when it comes to horoscope compatibility.

The ancient tradition of matchmaking through horoscopes is known as Kundali Milan. This process has a reputation as the most accurate, well-established and highly successful one when compared to the other methods used across the globe. If you expect your marriage to be a happy, prosperous and a successful one, it is a very wise approach to check the horoscope compatibility beforehand.

Some crucial aspects of match making

Also, you should never miss the element of Bhakuta Kuta. You can never expect a perfect union in match making if Bhakuta Kuta works unfavorably. When it comes to match making, Nadi Kuta is another vital element to consider.

According to Astrologer Dr. Sunil Tripathi, relying on computer generated horoscope compatibility checking is no the best idea. As he says, match making is a process that requires a humanely touch instead of an automated process.
Mangal Dosha and its Cancellation
If you are looking for anyone for Horoscope Matchmaking then We would like to tell you that We at www.varanasiastro.com do the task of horoscope matching manually. The process goes through the following steps.
1. Guna Milan
2. Check manglik Dosha with percentage
3. Check Shadastak Dosha
4. Ashtakvarga Horoscope Match
5. Age, Health, Character etc.
Click here to read about Nadi Dosha
Fill out the form below for Accurate Match Making Services and remedies By Astrologer Sunil Tripathi- ​
Bhakoot Dosha & its Cancellation
Proudly powered by Weebly